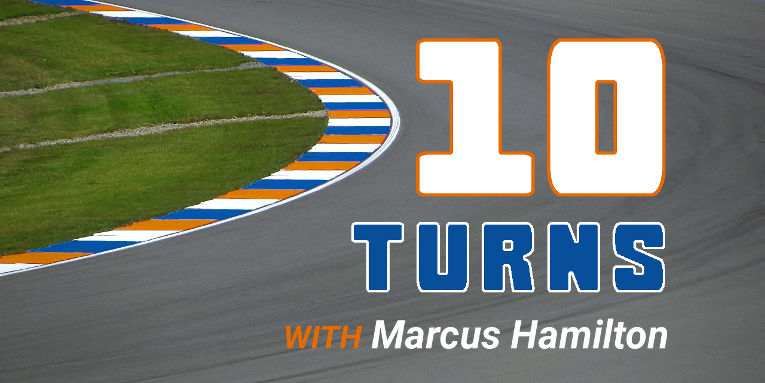 Welcome to the second edition of 10 Turns here on neo-endurance.com. Today, I’m lucky enough to be joined by Marcus Hamilton. He’s with the Thrustmaster Mivano Racing team and he’s on their #3 P1 entry that won the overall race at the recent 6 Hours of Sebring.

Corey Davis: Marcus, congratulations on the win and thanks for agreeing to join us!

Marcus Hamilton: Cool, thank you. It’s all cool, happy to be here.

Corey: Excellent. I think by now you understand how this interview will go, so if you’re ready, we’ll go ahead and get started.

But yeah, it was a great series of games. I don’t think anything has really come close to the realism in F1 since, to be honest.

Interesting. Niel mentioned I think it was Grand Prix 2 that got him started. Do you remember which game it was that you first got into?

I think it might have been even Grand Prix 1, even maybe just for a year or two. But yeah, Grand Prix 2 was the one that had pretty good graphics and everything.

I think it’s probably how bad my racing rig used to be. For the first couple years on iRacing, I had a Logitech G27, I think, and the pedals and everything like that. But the funny thing was I was basically sitting on a giant fitness ball. I’m not actually sure how I ever managed to win races or anything like that, because literally if I did any sudden movements, I could almost literally fall off.

Worse yet, the desk I had was really weirdly shaped, so I kind of had to velcro the wheel on so it was never perfectly stable or anything like that. It was all pretty bad. I still had lots of fun, though, but nowadays I at least have a chair.

Yeah, that sounds a little sketchy.

I think in terms of pace, I’m not too bad, I hope, but there’s definitely a lot that are faster than me. There are a lot of other aspects to racing where I feel I excel a fair bit. Things like strategy, maybe setup although don’t ask Freddy Evers about that because he’ll just laugh at me. Consistency, things like racecraft. I kind of call myself a complete driver. I guess in terms of place, definitely not the best, but all the other elements, I hope I can catch up on.

Do you feel like you had to change your driving style at all for the P1 cars?

It’s an interesting car because of the hybrid deployment and . The braking is the main aspect, right. You can actually make up a fair amount of time if you just brake a bit longer. I think the key in it late. If you always are on the side of caution and brake slightly earlier, then you can make up quite a bit of time per lap, I think.

I’m not sure I would call it a favorite but definitely the most memorable for me would be quite a long time ago, the 1994 Australian Grand Prix. That was when Schumacher took out Hill to win the title. That was probably the first year I properly followed F1, and it was hugely eventful and a sad season with Senna passing.

But in that final race, the way Schumacher behaved and watching Hill’s reaction once he crashed, sitting in the car in the pits kind of in despair because there was nothing they could do to fix his suspension. I really felt for the guy then, so I was pretty happy when he won the championship a couple of years later.

5. If you could design a race using any of the content or features on iRacing, what you would pick that would give you the best chance of winning?

To start with, I kind of think endurance racing is the thing that suits me the most anyway, so it would definitely have to be multiclass with lots of traffic. The more, the better. I would maybe get rid of teammates so then I wouldn’t have to drive with Fred, but hopefully he won’t listen to this so he won’t know I said that.

I would probably make the races pretty long because I feel I can drive consistently for two to three hours quite easily. In terms of things like the track, when I drove the Star Mazdas quite a lot in iRacing, Montreal for whatever reason, I was always particularly strong at, so I guess it’d have to be that track.

And if it’s going to be a long individual race, how long is too long for you?

I think the most I’ve ever done is like four hours. That was in one of the 24-hour events. I was okay with that. I think I’d go with something like that. I know I’d at least beat someone like Tommaso because he can’t drive that long before he needs to pee, so four hours sounds good.

To be honest, I kind of end up starving myself on race day. I literally just have a few snacks to keep me going. I guess once the race is over, I’ll literally just feast on whatever we’ve made that weekend. Either that or race end or after we’ve crashed, whichever comes first.

Are you the type that will take breaks during a six-hour race or do you pretty much stay right at the computer?

If I’ve got a nice stint break then yeah, I’ll get up and eat something. I won’t do spotting or anything like that. It’s good to get a break. You definitely need to recharge mid-race.

If you look five years back, I think things have come a really long way, so I’m pretty excited about the next five years if I’m honest, assuming I’m still doing it. Just in iRacing, it doesn’t look like I’m going to have to wait long for things like day-night and rain. I’m sure everyone can’t wait for that. Those are going to be cool.

Beyond that, the game-changers for me, I would say, firstly it’s virtual reality. I’ve tried the Oculus Rift and it was really cool, but for whatever reason, I kind of felt that it wasn’t quite good enough yet for me to want to use it full-time. But I think motor racing is one of the things that’s literally perfect for VR, so in the next couple years once they evolve it a bit more, I think sim racing is going to be such an amazing VR experience that that’s going to be a really good evolution overall.

I think the second thing would be maybe how sim racing starts to compete directly with real-life racing. I’ve seen lots of noise and articles about how both Formula 1 and Formula E are looking at how you can almost race at the same time as the real race against the real drivers. Certainly Liberty seem to be taking the whole esports piece quite seriously now, so it’s going to be really interesting how all that takes off.

8. Who is one current driver in NEO that’s never been your teammate but who you’d like to run an endurance race with?

I’m going to cheat a little bit with this one, but I’m going to pick — he’s actually in Mivano but I’ve actually never raced in the same car with him — that is José María López. I’m sure most people know, but he’s a Toyota LMP1 driver in real life. In fact, he just won the latest Fuji race against Fernando Alonso.

He also drives in Formula E and I think he won the World Touring Car Championship a few times. I think it would be pretty cool to drive an LMP1 endurance race with him. He’s a pretty busy guy so it’s difficult to get something scheduled in, but we’ll see. He did manage to do a few NEO races last season, though, so fingers crossed.

Since you guys are on the same team, do you get to talk a lot, or do you really not see each other very much?

We used to, in the iRacing Le Mans Series. I can’t remember if it was season one or season two. But we definitely raced a lot together and that was huge fun, although he did wreck me once, which wasn’t cool, and PRT found it quite funny. Apart from that, he’s a really cool guy. Really fun to drive with.

9. From the last interview, Niel Hekkens wanted to know from the next driver if they race ovals, and if so, what they race, and if not, why not?

Right now, I don’t, but when I started iRacing, funny enough, I literally only drove ovals. I’d never driven them before. NASCAR kind of looked interesting to me, so I thought I’d give it a go. I did get hooked pretty quickly just because there’s so much actual racing action that goes on. I absolutely loved driving the NASCAR trucks for a while, but I was never that great, unfortunately.

Once I joined Friction Racing and started taking iRacing a bit more seriously, I just focused on road racing from then on. So I haven’t done it for a long time, but I absolutely loved it when I did. I think the best part was always listening to the outrage when people got wrecked. That was always hysterical. I don’t know if that still goes on, but that was a funny part of it as well.

I think there’s still a good bit of that.

10. Finally, do you have a question that I can ask the next person?

Can I ask two questions? One serious and maybe one not so much. Does that work for you?

I’ll allow it. We can make this 11 Turns for the next interview.

Alright. One question would be, if there’s one thing you could change to make NEO an even greater series, what would it be and why?

And the serious question: Is Frederic the best Evers?

Haha, I look forward to hearing the answer to that. Marcus, thanks so much for taking the time to join us here on 10 Turns. I hope you enjoyed it!

Yep, no problem. Thanks a lot.

Just as a reminder, coming up next weekend, we’ll have coverage from the 6 Hours of Circuit of the Americas, so stay tuned to neo-endurance.com and @NEOendurance on Twitter. Thanks again for listening!